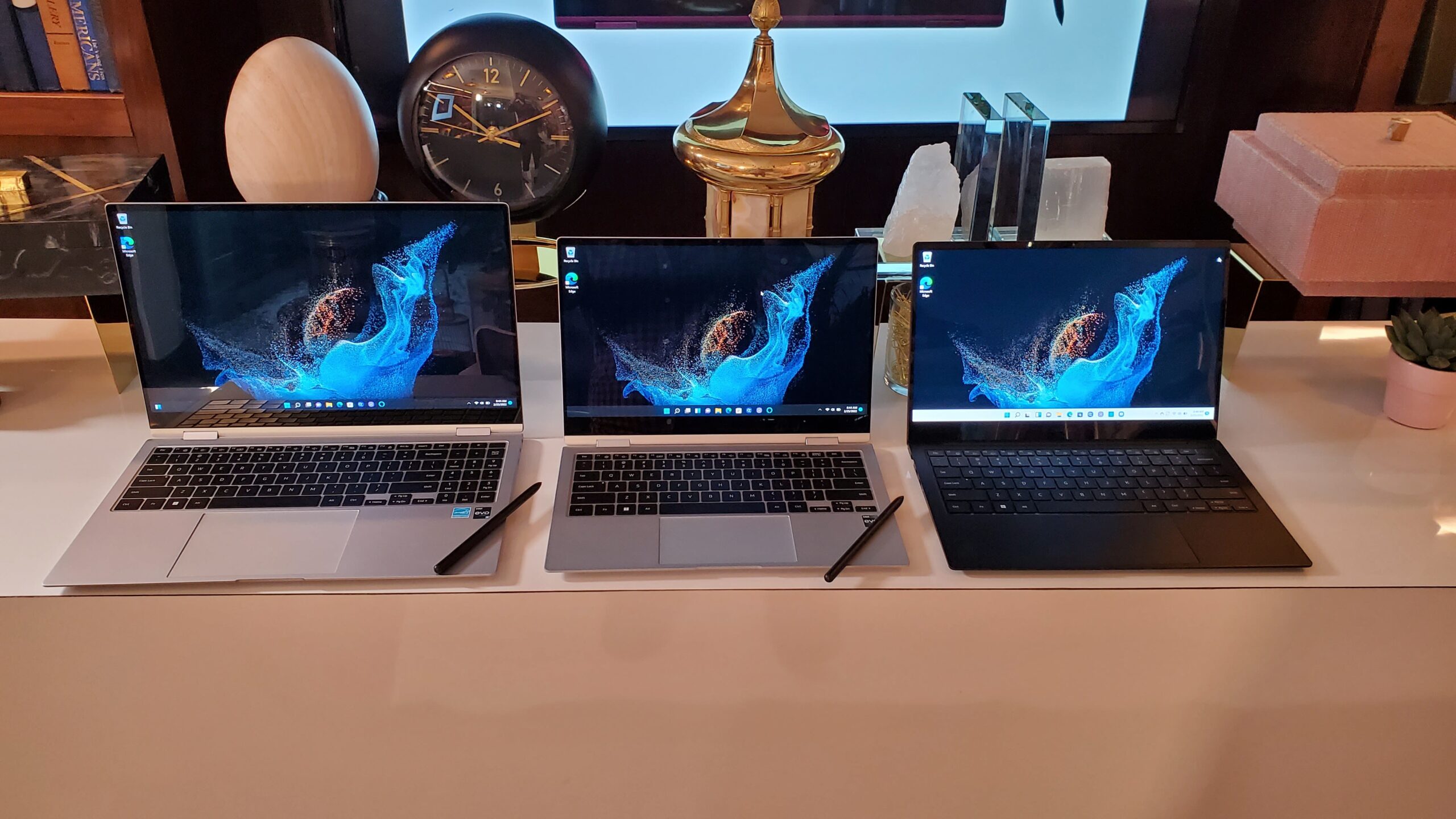 The Galaxy Book2 Pro 360 clearly isn’t designed to stun, with a fairly standard clamshell look—and this is particularly the case with the simple silver model I tested. Instead, it’s the quality feel of the device, alongside its thinness, at 11.9 mm, and manageable weight, 3.11 pounds (1.4 kg), that’s worth appreciating. Though, burgundy and graphite options do half-heartedly attempt to jazz things up a bit.

The design of the Book 2 360 is typical of most modern Samsung laptops. It’s an impressively thin (12.9mm) and light (1.16kg) device, but retains all the hallmarks of the premium Galaxy Book range.

An aluminium finish adds to the high-end look and feel, but Silver is your only colour option in the UK – there’s a Graphite version available to US customers. But Samsung is clearly going for an understated, minimalist aesthetic, which is only interrupted by a discrete logo on the back.

This design certainly won’t be turning many heads, and it looks very similar to many other modern laptops. But it’s clearly effective, and there’s no need for Samsung to take big designs risks on a device like this.

A 360° hinge is anything but revolutionary, but a durable build means you get convertible functionality without it feeling flimsy. The option for a ‘tent’ mode or tablet is useful in some scenarios, but the pure tablet experience still isn’t great. The Book 2 360 is much heavier than even the Surface Pro 8, making it uncomfortable to hold for more than a few minutes.

The best experience is still as a traditional laptop, where I was impressed by the lack of screen movement while typing. This is something that often affects convertibles, including some made by Samsung.
You still get a decent sized 13.3in display, but the chunky bezels above and below it are a disappointment. Samsung has managed to keep them razor-thin on the sides, and there’s no obvious benefit to making them so big here.

Indeed, the only thing you’ll find above the screen is a 720p webcam, but Samsung hasn’t shown it much love. Stills and video are low quality and grainy, making for an underwhelming video calling experience. Dual mics mean you sound pretty good, but I’d highly recommend buying a separate webcam for anything more than casual calls with friends and family.

Without a separate IR sensor, you can’t use Windows Hello face unlock on the Book 2 360. The fingerprint sensor built into the power button is your only alternative, but it performs very well. Following a fast and easy setup process, it proved to be a fast, reliable method for unlocking the device.

Despite being relatively thin, Samsung has still made room for a decent port selection. Either of the USB-C ports can be used for charging, although only one supports Thunderbolt 4 for ultra-fast data transfer.

It’s joined by one USB-A, full-size HDMI, microSD card reader and 3.5mm headphone jack. Adding another USB-A port would make this pretty much perfect, but it’s still above average for a thin and light laptop.

Samsung once again reiterates the fact that they truly make one of the best displays in the market. The Book 2 360 features a 13.3-inch AMOLED display belting out 1080p resolution with a refresh rate of 60Hz. We watched the entire MCU’s Moon Knight series on it and we were amazed at the colour quality and resolution – thanks to 10-bit colour depth. The display is also capable of supporting HDR or High Dynamic Range.

The display gets a 100 per cent DCI-P3 colour gamut and outdoor viewing is easy – thanks to the rich colours. Considering the pricing of the Book 2 360, the display sits right at the sweet spot. One of the best displays on a 2-in-1 laptop – the Book 2 360 could fairly be one of the best minimalistic looking laptops out there.

And the best part – it supports the S Pen as well. We were able to use the S Pen from the S22 Ultra. The display gets up to 10 touchpoints and you can use it as a tablet. This is nothing when you get to know that Samsung has used Wacom’s Pen technology which is considered the benchmark for digital artists. A basic WACOM display with a stylus and 93 per cent of the DCI-P3 colour gamut will be an expensive affair – so this laptop is a steal for those digital artists looking out for a decent unit.

The keys feel as though they have decent tactile feedback with enough travel which is a wonder considering how thin the laptop is. There is no number pad which means the keys are full-sized – considering we have – er – big hands.

The trackpad is responsive, and Samsung claims that palm rejection has been improved over previous generations. They also fixed an issue that caused accidental clicks on previous Galaxy Books, resulting in one of the best trackpads ever seen on a Galaxy Book.

Our review unit turned up powered by the latest Intel 12th generation Core i7-1255U chipset running on 10 cores. Out of those – two are performance cores while the rest eight act as efficiency cores with a clock speed of 1.7GHz to 4.7GHz. The processor is coupled with 16GB of RAM and 512GB of PCIe 3.0 SSD storage.

The processor is based on Intel’s Evo platform, which means it’s optimised for thin and light laptops, convertibles, and tablets. It’s a fast and powerful processor that breezes through most tasks – browsing, office, conference calls, and so on – and performs admirably as an office machine.

However, as a professional workstation or gaming device, its lack of a dedicated GPU hurts it. The device also has thermal issues, and when stressed, it gets hot, especially around the middle, where it would normally rest on your lap.

The size of the Galaxy Book 2 360’s battery varies slightly depending on the model you choose. On the Core i5 model you get a 61.1Wh cell, but the Core i7 version has a fractionally higher 63Wh capacity. That may offset the slight increase in power consumption of an i7 chip, but you probably won’t notice a difference.

In general, battery life is excellent. You’re looking at a full day on a single charge, provided you don’t play lots of hi-res videos or keep the brightness close to max – more than can be said for many laptops these days.

What’s more, our testing proves you can eke even more out of the battery. Looping a 720p video at 120 nits isn’t typical of real-world usage, but the Book 2 360 lasted 14 hours and 58 minutes – one of the best scores we’ve seen. That was with battery saver mode turned off, too.

When you do run out of charge, the 65W adapter included in the box will soon get you up and running again. I recorded 24% in 15 minutes from off, then 46% by the half-hour mark. In under 75 minutes, it was fully charged. Either of the two USB-C ports can be used to get these impressive speeds.

As expected, the Galaxy Book 2 360 runs Windows 11 Home out of the box. Unlike with phones, the software experience here is consistent with almost every other Windows 11 laptop. It’s well-optimised for a 13in display, and there are plenty of customisation options available.