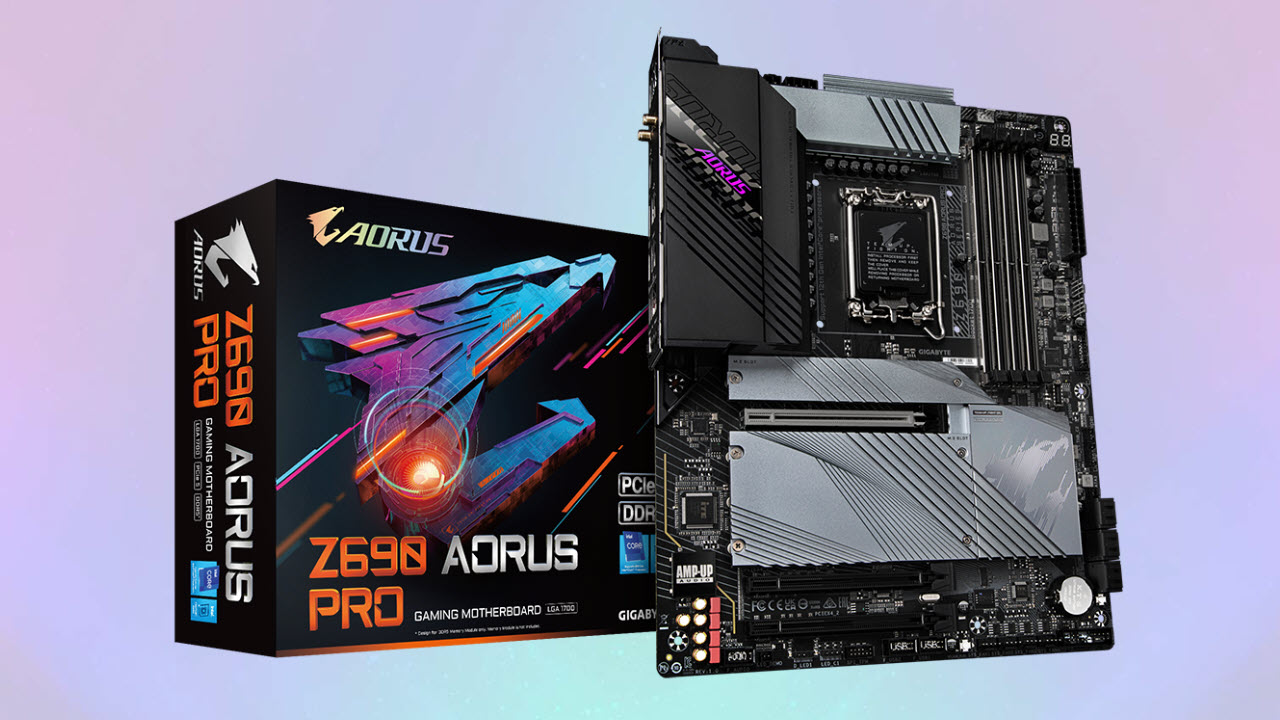 Intel’s 12th Gen CPUs are pretty darn fast, and now that the 65W CPUs have been released, there are some really affordable options. Sadly, Z690 motherboards have taken a big step up in price since last generation. Though there’s some value to be found, especially if you don’t care for expensive high-end exclusives such as Thunderbolt 4 or 10G LAN.

It’s worth noting that while we’re reviewing the Aorus Pro DDR5 model, there’s also a DDR4 version. Sadly, though it’s easily found in my native Australia, is not available in the US or the EU. That’s a real shame as the Aorus Pro DDR4 looks like it’s one of the better featured DDR4 boards, though I guess we can understand the desire to keep the DDR4 models more on the budget end of things.

The DDR5 version of the board features a highly contrasting design, with lots of grey heatsinks. Though a lot of the grey chipset and M.2 cooling will be hidden beneath a GPU, it might not be the easiest board to blend in with your build. There’s also minimal RGB lighting with just a tiny Aorus logo atop the rear I/O heatsink. That’s rare for a gaming motherboard in 2022. There are four RGB headers, though, with two of them being addressable, so you can still add plenty of flashy illumination if you really want.

The board itself comes with a single PCIe 5.0 x1x slot plus another two further PCIe 3.0 x16 physical slots that operate at x4 electrically. There are six SATA ports, seven fan headers, plus another for a water pump. A power button and debug LED are also welcome additions at this mid range Z690 price point.

One of the strengths of the Z690 chipset is its wider chipset-to-CPU DMI link, which runs at PCIe 4.0 x8. That’s double the bandwidth of the PCIe 3.0 x8 link of the last-gen Z590 chipset. This means the chipset is capable of running more devices simultaneously with fewer compromises. In addition to the primary CPU connected PCIe 4.0 M.2 slot, the Aorus Pro comes with a further three slots which all run at PCIe 4.0 x4, and all of which have heatsinks. If you use them all, however, you’ll need to have good airflow to prevent them absorbing heat from a GPU when you’re gaming.

The Aorus Pro comes with a strong VRM and it’s likely this was designed with AVX-512 loads in mind prior to its late official removal by Intel(opens in new tab). The overpowered VRM systems are certainly part of the reason that Z690 boards are more expensive than their Z590 predecessors. The Aorus Pro’s 16+3 phase VRM with 90A stages would have been exclusive to high end boards just a couple of years ago. With 1440A on tap, even an LN2 overclock isn’t beyond the board. Air and water coolers will run into CPU cooling limits well before the board itself is stressed.

The heatsinks are effective, but we’re sorry to see Gigabyte didn’t include the finned heat sinks of the higher tier Aorus boards. When subjected to a VRM torture test the Aorus Pro returned a peak temperature of 57°C. That’s about the middle of the pack, but 8°C hotter than the excellent finned heat sink of the Aorus Master. As long as your airflow is adequate, the VRM of the Aorus Pro will easily handle an overclocked Core i9 12900K(opens in new tab).

The rear I/O is very good, most especially the complement of 13 USB ports! Few modern boards come with more than that, especially at this price point. It’s made up of four USB 2.0 ports, four 3.2 Gen 1 ports, four 3.2 Gen 2 ports and a Type-C 3.2 Gen 2×2 port. There’s a single 2.5G Ethernet port, Wi-Fi antenna ports, and a DP 1.4 port for use with Intel’s Xe integrated graphics.

Perhaps the only omission is a full set of analogue audio ports connected to the Realtek silicon. There are line in and line out ports only but that’s really only nitpicking.

The Z690 Aorus Pro comes with pure Intel networking, consisting of a 2.5G Ethernet and Wi-Fi 6. We’re okay with that at this price, because 5G LAN and Wi-Fi 6E are among the things used to justify the sky-high pricing of Z690 boards costing a lot more.

Z690 boards seem to perform within a margin of error of each other for the most part, with few outliers. The Aorus Pro did well in multi-threaded tests, gaming tests, and storage tests. It seems that Intel’s long duration 241W PL2 limit is leading to a convergence of results. Previously, some makers played fast and loose with Intel’s power settings and tau, which doesn’t seem to be the case now that limit has been extended.

Using CPU overclocking as the measure of a board’s quality is all but useless when any mid-range to high end board will have a VRM thats not stressed before you reach CPU cooling limits. Memory overclocking is a different matter, however, as it relies a lot on BIOS optimization, especially in these early days of the DDR5 era.

Our G.Skill DDR5-6000(opens in new tab) test kit is 100% stable at 6,400MHz on some boards, such as the Asus ROG Z690 Apex(opens in new tab), but we couldn’t find stability at that speed with the Aorus Pro . The Aorus Pro’s early BIOS really struggled with our Samsung-based G.Skill kit, but after a couple of updates, it ran at its rated XMP speed.

We think 6,400 MHz could well be on the limit of our memory controller, at least without going too crazy on VDDQ voltage. The takeaway is: don’t forget to update the BIOS of the Aorus Pro if you’ve got a fast DDR5 kit on hand.

Gigabyte’s Z690 Aorus Pro sits in a genuine Alder Lake sweet spot, where it offers good value for money and a nice, rounded feature set. Features such as Thunderbolt 4, a fifth M.2 slot, or 10G LAN would add considerable extra cost which is hard to justify. With plain Wi-Fi 6, 4x M.2 slots, a strong VRM, and loads of USB ports, most gamers will be happy. And at $330 you’ll have a few dollars that you can put towards the scarcer things, like DDR5 memory or a faster GPU.

With those kinds of key features, and an attractive price, the Aorus Pro is a good, solid mid-range board. It feels like it’s not quite at its best yet BIOS wise, but it’s come a long way from its pre-release state, and the same can be said of many boards. We’re still in the early days of the platform. Make sure you download the latest BIOS, though, once you do that the Aorus Pro is a board we’re happy to recommend for your 12th Gen build.